He used to ask me for last minute leave. I always told him he should be more organised. He always said he would. We both knew he was not going to be. Because for him there was more to life than just being organised… and he was right.

Too many of us spend an awful amount of time planning life, while he seemed to spend life actually living it. What I am trying to say is: Every morning you wake up, it might be your last one. Every time you meet someone, it might be the last time you see them.

The general perception is that the young ones have a lot to learn from the slightly older generation but what if this perception is wrong? What if it’s exactly the opposite? What if it’s us – the sensible and grown-up ones who should remember what it’s like to have the courage to dream and follow our hearts?

My personal tragedy of late is that I have spent the last year being mega busy working, planning my career, cleaning the house and looking after my gorgeous child, so I had absolutely ZERO time left for self-reflection and thinking about my feelings. Actually, I don’t even know if I had any real feelings (apart from the love for my little one). I haven’t read a single book, I have not been responding to messages of relatives and old friends, I have not felt in love, I have not written anything remotely creative, I have rarely listened to music, I have not been truly excited about anything… Through 2019 I have felt like an imposter of a human being, rather than a real person. This all because I was too busy doing what “needs” to be done.

A recent tragic death of a decade-younger colleague made me realise that my approach to life was not entirely right.
He used to ask me for last minute leave. I always told him he should be more organised. He always said he would. We both knew he was not going to be. Because for him there was more to life than just being organised… So my 2020 New Year’s resolution is to spend less time being organised and more time actually living. 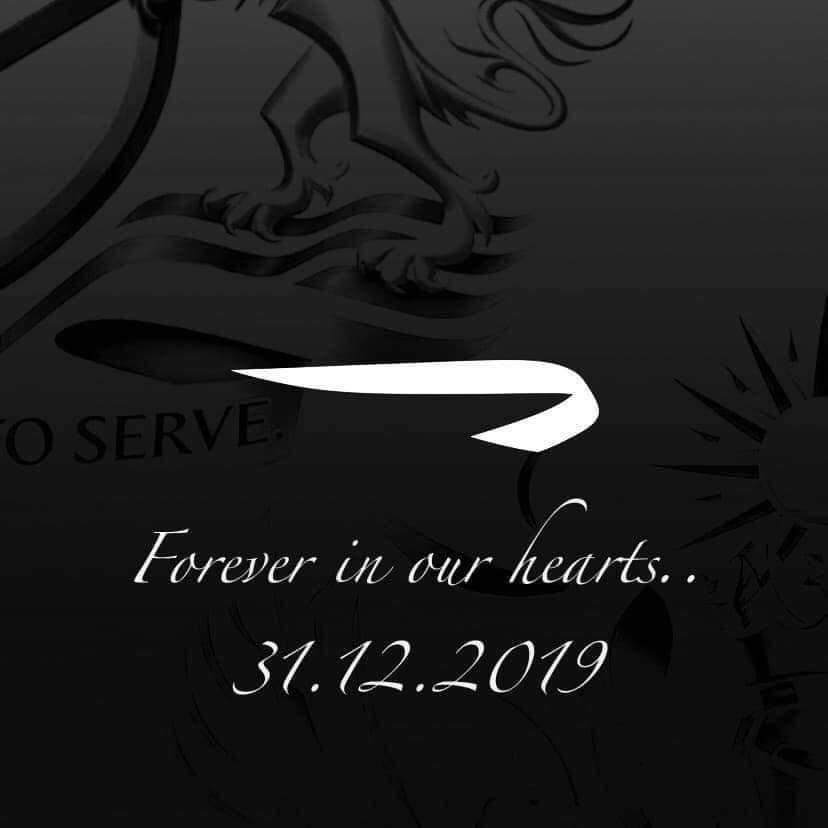 Please support the families of our colleagues who tragically passed away on New Year’s Eve.

I’m sure plenty of people go / went through the process of deciding whether to have kid(s). One of the arguments not to, is the general perception that you can’t have it all. So if you have a child, you have to sacrifice other aspects of your life. Especially as a single mum. You simply can’t be a good parent, bring home the bacon, have an actual career going on and look good. It’s impossible. Or so they say.

But those who know me, understand that there is no limit to my stubbornness and determination. So I decided I will have it all. My @Derrys_Diary is 18 months old. I am slimmer than ever and this year I ran 5K, 10K and half-marathon PBs which suggest I am fitter than before I had a baby. I got a new job while still on maternity leave, and five months later I successfully got into another new job that is proving to be the perfect role for me. Besides finally having flexibility, I am able to use the creative as well as logical part of my brain, within an industry I am passionate about and in a company I adore. It is a dream come true.

Yes, my little one has to stay nine and half hours a day in a nursery but I swear to you – for both him and me this is more beneficial than spending 24/7 in each other’s company. He gets the opportunity to play with his peers, learn some social skills and experience all the songs, messy art sessions and similar things that are just not my thing. At the same time, while he is in the nursery I have an opportunity to be me – as a professional, not as a mother. Win-win. I believe this makes me a better parent indeed, because I seem to have more patience for his little toddler dramas and tantrums.

It would be delusional to deny that there are sacrifices to be made pretty much on a daily basis, but to me they are just little trade-offs rather than massive life-limiting sacrifices. So this is a message to those who are told that their life is about to be totally over and to those who blame the lack of career and/or exercise on being a parent. It is possible! It is possible to have it all providing you find the motivation and flexibility – because as they rightly say “if there is a will, there is a way”. Always. And I am a living proof of that.

Last Sunday I was getting ready to head out to my local supermarket for a quick essentials shop (nappies and prosecco). 16 months old @Derrys_Diary insisted on taking along a TV remote control. I said no. Because you simply don’t take TV remotes out. It’s something people don’t do. 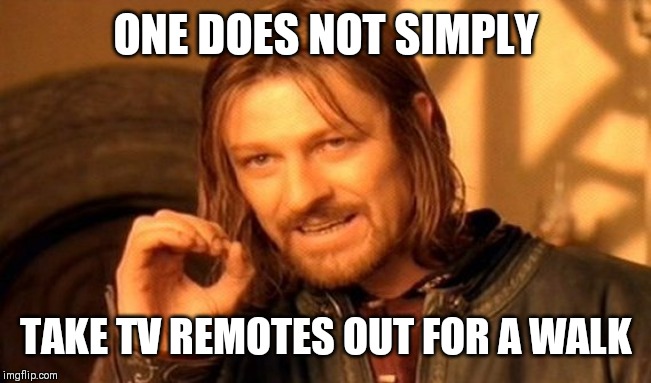 Then I thought to myself: People generally don’t take remote controls out for a walk. But people often lie, are unkind, don’t care about people, spread gossip and judge others. That’s what people do do.

So why should I force “the rules of this world” onto my little one? Why should I teach him that status quos are not to be challenged? Why should I tell him what’s normal and what’s strange? Yes, taking a remote control out to shops is definitely outside the box, but isn’t an “out of the box” way of thinking associated with society’s high achievers, big minds and influencers?

So, why would I force my child to stay in the box? Yes, I do have responsibility to teach him right and wrong in the moral context, but otherwise – screw the box!

We wandered through the isles of Tesco Extra, him clenching his Sky TV remote, happy as Larry because as far as he knew the remote control gave him the power to have a say in the future world and make his own choices.

Yesterday it was my birthday! Yay! 15 months old @Derrys_Diary got up at 5:20 am to celebrate. Shortly afterwards, he scattered crushed cheerios all over sofa (first breakfast) and rubbed yogurt into his hair (second breakfast). Then he started banging on neighbours’ wall (to celebrate my birthday of course) before deciding he’s hungry some more. So instead of making myself a cup of coffee, I cooked him a puree of apples, nectarines and carrots, and he went ballistic because it took four and half minutes to cool it down.

At 8 am, when I got tired of him hitting his head with an empty cereal bowl and using the wifi router as a football, I dispatched him to the nursery where he had a meltdown because they already stopped serving breakfast and he was incredibly hungry. 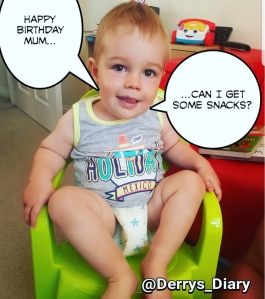 At 8:30 am I was already exhausted and opened a bottle of prosecco. More prosecco followed in my local Wetherspoon’s (posh!) accompanied by a £5.95 burger and neverending depressing statements from @Derrys_Diary dad who was leaving on a jet plane in a few hours time. Later on at home when I attempted to get some birthday attention (i.e. a snog), he started clipping his nails behind my back while hugging me. And they say romance is dead.

As soon as he left for the airport I rushed to my local pub for a drink with the girls. When I arrived, the bar manager wished me a happy birthday and pointed at prepared bottle of prosecco and pre-chilled glasses. He refused to tell me who arranged and paid for it, and I for a brief moment hoped that the mysterious person was a handsome thoughtful guy with an athletic body shape and an above average IQ. Obviously, it wasn’t Him, and the “secret admirer” turned out to be one of my girl friends (thanks Noels!).

I left my birthday session 1 hour and 47 minutes later as I had to do a Tesco run before collecting my hungry child from the nursery. After countless tantrums and dramas, I sent him to bed, tidied up his toys, put the laundry on and washed the dishes, before collapsing onto my bed and falling asleep at about 9pm.

Yes, on my birthday I did wish for flowers and heart-shaped chocolates and actual gifts (ideally jewelerry or spa treatment vouchers) wrapped in glittery paper and fancy ribbons. At the same time, I could not possibly be unhappy, neither disappointed, because looking at the face of my little @Derrys_Diary, I knew I had no right to ever wish for anything else in my life, because I do already have the one thing that really matters.

Nearly ten years ago I got an airline job in Belgium. It seemed like a great idea as it was going to help me improve my (practically non-existent) French. In practice, this idea was not as brilliant as I thought. Local citizens and my customers looked down on me – because if one can’t speak French, one clearly must be a loser and a low class being. And so my initial enthusiasm turned into disgust towards the language and everything French (apart from croissants – I do like those).

My stay in Belgium turned out to be depressing rather than educational. I didn’t have the courage to go to my local pub because I’d get some weird looks. Whatever else was happening around was happening in French. I ate in McDonald’s because “Big Mac” sounds the same in any language. There was only so much computer gaming I could do without turning into an odd geeky asocial. I hated exercise. So TV was the most viable pastime. This was before the time of Netflix and Amazon Prime and the only English TV channel I managed to catch was BBC 1. What a life saver!

I watched it all – from Homes Under the Hammer to Songs of Praise, but my all time favourite was the Apprentice. Oh how I loved observing the cocky yet majorly useless candidates making stupid decisions and blaming it on their peers. Fun!

You know, when watching a quiz show, for instance the Chase, from the comfort of your sofa, you perform much better than the contestants. You get all the questions right, take the high offer and victoriously outsmart the chaser. Then you go on and on about how well you’d do if you went on the show, yet everyone (including yourself) knows that you will never ever have the courage to do so.

Similarly, I sat in front of TV and each new Apprentice episode convinced me further that I have a great business mind and would do much better than the contestants. So I took an action. No, I didn’t apply to be Lord Sugar’s business partner. I signed up for an MBA because it appeared that MBA was the degree the most candidates had and were proud of.

So let this be a warning to you – watching TV can inspire you. Oh, and it can also prove to be costly. Now here I am a few years later, £11 thousand poorer (scholarship included), yet with broader horizons and a fancy MBA title, tremendously enjoying this year’s Apprentice. Thanks Lord Sugar 😉