I randomly started running last year, after three decades of hating & avoiding it. Recently, I have completed my first couple of half marathons, only two weeks apart. When photos from both events emerged, my friends couldn’t refrain from commenting on how happy I look running those 13.1 miles. And I didn’t only look happy, I was happy sweating my baby’s milk containers off. 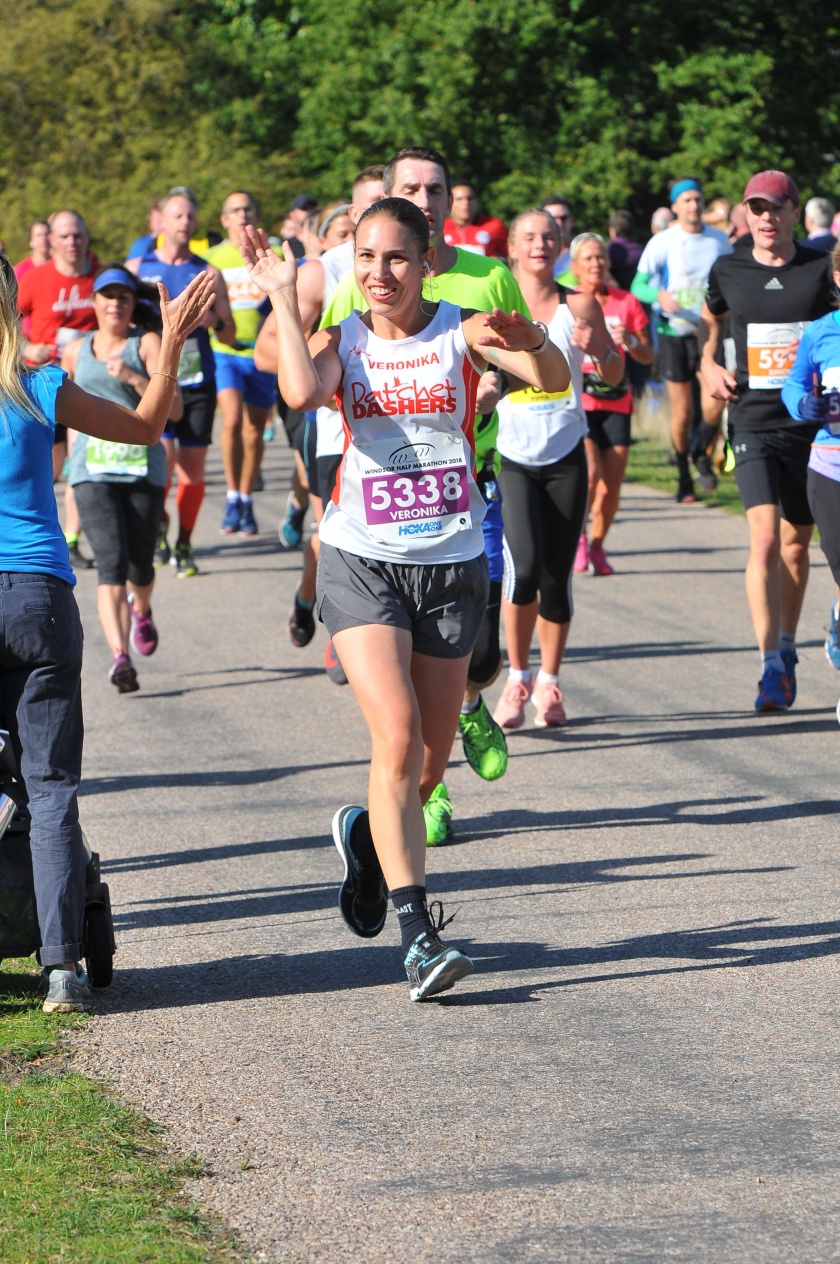 I did very little (if any) training beforehand – I managed the odd jog with a buggy, weekly buggy parkruns and one 15K session around Dorney lake (which was by far the longest distance I have ever ran). When it came to the race, my philosophy was to run, run and run some more until I’m at the finish line – and that’s exactly what happened. Boom! I even managed to knock 8 minutes off my first half, and completed Slough half in under 2 hours. Not too shabby for a mum who has no time to train and eat well, right? I found it enjoyable instead of deadly hard. Do you want to know why? Well let me tell you about “hard”:

Soaking wet and shivering with cold after Slough half, we arrived to a pub. At that point, any normal race finisher would order a whole lot of food and flush it down with a gallon of beer, relying on Uber to get home because legs are tired.

I ordered a whole lot of food indeed, but my 6 months old miniature human was hungry – as if he ran the half marathon himself. So I fed him first. Then finally my meal arrived. Just as I was about to grab my first delicious piece of chicken, he went ballistic. Nothing worked and he screamed and screamed. I dragged him out (in rain) hoping he would fall asleep in his buggy. He was howling more and more so I returned to the pub, downed my wine and asked the staff to bag my food up. It was a good 20 minutes walk home, in rain, on aching legs, with a child screaming like an apocalypse survivor being slowly munched on by zombies. No matter how annoying his screams are, I always smile at him (that’s my personal rule) which is mentally exhausting. At home it took another hour of “servicing” him – food, nappy, toys, singing etc. Finally he fell asleep so I started the laundry and washed the dishes (the pile was already enormous). He woke up from his nap just as I was getting out of the shower. Then obviously he needed more “servicing”, including a broccoli dinner that he rubbed into his hair and eyes, and a bath time when he tried to drink the bath water (probably because it had bits of broccoli floating in it). By the time he departed into the dreamland and I (finally) sat down with my reheated pub lunch it was 7 pm. I crossed the half marathon finish line seven and half hours ago. F**k, in seven and half hours I could have completed a marathon and half!! And a marathon and half would most certainly be less exhausting than my standard afternoon anyway.

So when you non-runners say running 13.1 miles must have been tough, and you runners say that I did well so soon after having a baby, I do appreciate and love your support and acknowledgement, but… it was DEAD EASY compared to the never-ending ultra marathon of poops and mushy food and vomit and eternally dirty laundry and high-pitch screams and stupid baby songs on repeat… Easy!! 🙂

One thought on “The half-marathon mama: How I ran my first two half marathons”